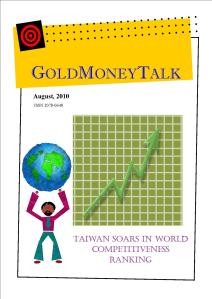 Table of Contents of August 2010

PetroChina achieved sharp growth in first half of 2010

Universiade one year to go

In the IMD World Competitiveness Yearbook 2010 issued in May, Taiwan’s place in the global competitiveness ranking has soared to the 8th place, up from 23rd place last year. This is the fastest advance made by any of the 58 economies surveyed for the report. The credit for this achievement goes to huge improvements in Taiwan’s total score in four core indexes: Economic Performance, up from 27th place to 16th; Government Efficiency, up from 18th to 6th; Business Efficiency, up from 22nd to 3rd; and Infrastructure, up from 23rd to 17th. END_OF_DOCUMENT_TOKEN_TO_BE_REPLACED

China’s auto output and sales in the January-July period both surpassed 10 million units, respectively 10.21 million and 10.26 million, up by 44% and 43% year-on-year. The main features are as follows: END_OF_DOCUMENT_TOKEN_TO_BE_REPLACED

PetroChina achieved sharp growth in first half of 2010

PetroChina Company Limited (“PetroChina” or “the Company”, HKSE: 0857; NYSE: PTR; SSE: 601857) announced on August 26, 2010 that it continued to implement its “resources, market and internationalization” strategies in the first half of 2010 despite a complicated macro-economic environment.  Net profit attributable to owners of PetroChina for the six months ended 30 June 2010 was up 29.4% to RMB65,330 million from the same period in the preceding year, based on International Financial Reporting Standards (IFRS). Basic earnings per share were RMB0.36, representing an increase of RMB0.08 from the same period in the preceding year. The Board of PetroChina has resolved to pay an interim dividend of RMB0.16063 per share (inclusive of tax), or a payout ratio of 45% based on the interim net profit under IFRS. END_OF_DOCUMENT_TOKEN_TO_BE_REPLACED

Taiwan’s Council of Labor Affairs (CLA) plans to expand the direct hiring of foreign workers and allow employers that hire foreigners for the first time to do so directly. This will save brokerage fees for employer and employee alike and facilitate improvement of the salary structure for foreign workers (while leaving their salaries subject to Taiwan’s minimum wage), thereby helping out with employers’ operating costs. END_OF_DOCUMENT_TOKEN_TO_BE_REPLACED

Universiade one year to go

In this month, we saw a tragic ending of a hostage situation in Manila. A disgruntled former police officer hijacked a bus loaded with tourists from Hon Kong (HK). As televised live from the scene, the Philippine National Police (PNP) botched the job and ended this siege with a stunning loss of 9 lives after a chaotic SWAT assault.